If you ever looked into one of Broadcom's combo chip datasheets, you might have noticed a feature called "WLAN RAM Sharing". In the following, I will explain how to use it to get controlled code execution on Wi-Fi via Bluetooth, which can be helpful in a couple of scenarios:

Francesco and me looked into so-called coexistence features. If you want more details on this, watch our DEF CON or Black Hat talk from last year :)
In short, despite running on different ARM cores, Broadcom and Cypress BT/Wi-Fi have coexistence features, which include a unidirectional RAM sharing feature. This feature is shown in some leaked datasheets in the schematic overview, e.g. on the BCM4339 (aka BCM4335C0) that is in the Google Nexus 5. The feature is not described in detail, but at least it is shown in the overview. While coexistence is a great feature in terms of performance on a shared medium, this is definitely the place to implement bugs that break chip separation 👀 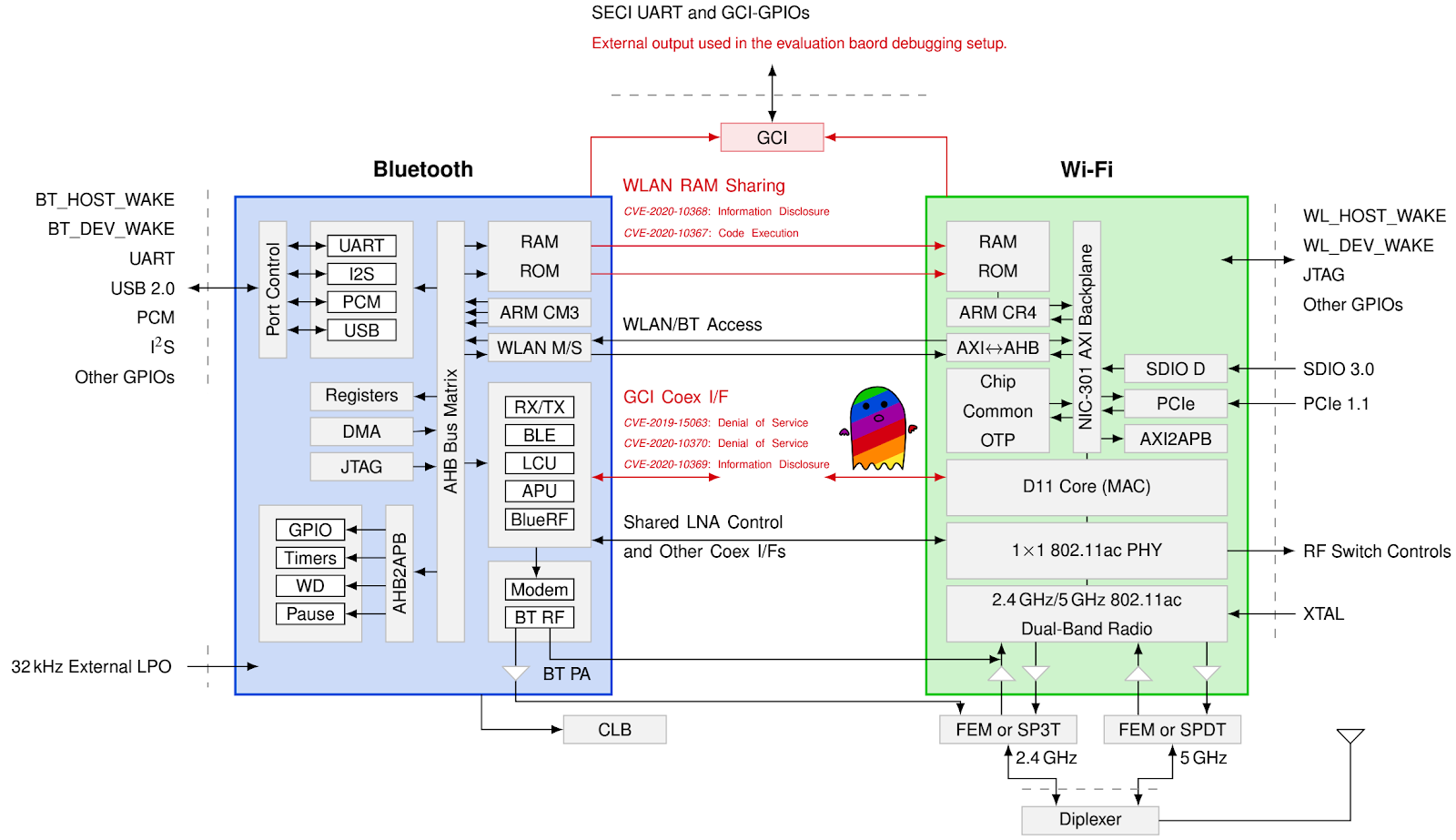 On most Broadcom chips, the Bluetooth memory region from 0x680000 onward is mapped to the Wi-Fi memory region 0x180000 onward. The Wi-Fi RAM starts on 0x170000 on most chips, so we miss a small region in the beginning of the Wi-Fi RAM. I have not found/verified the region's end yet, but it's definitely almost the full Wi-Fi RAM that is mapped. While reading from that region often results in zeros or shows weird repeating blocks, writing to that region is always successful.

Nexmon was built to support Wi-Fi monitoring mode on the Nexus 5, thus the name Nexmon. Meanwhile, it supports many other features including writing to a raw IQ sample buffer turning your Nexus 5 into a (very limited) 2.4 GHz SDR. It can also read raw channel state information, enabling various measurements on realistic platforms that are not an SDR. Nexmon never had a focus on security research, despite being used by many external security researchers. For its application, it is totally legit to never ever update your system once Nexmon is working or downgrade the Wi-Fi firmware to a build that is older than a year, since it is all about utilizing low-level functionality of a chip. Features are released for such firmware builds and are rather stable. Thus, it can be used by wireless researchers who are into signals but have no clue about firmware hacking.
InternalBlue is more like a toolsuite to enable Bluetooth firmware hacking. The patches are a bit more unstable and usually ugly raw Assembly instead of slightly more readable C patches. However, it tries to support the most recent platforms and builds no matter how ugly the hack for this gets. This means that you can run InternalBlue on the most recent iOS and macOS builds, Android 11, and, obviously, Linux. (Still no Windows support, sorry...) All it needs is a rooted smartphone. Since macOS Bug Sir it also requires disabled SIP for writing to the Bluetooth chip's RAM.
I didn't look to much into Nexmon internals and how it interacts with the drivers. Yet, one of the requirements for Android is to disable SELinux. On recent Android builds, even if you root your phone with Magisk, SELinux is still enabled, even after running setenforce 0 etc. You can of course build a custom kernel but that's a lot of work. In short, Nexmon won't run on a Magisk-rooted Samsung Stock ROM out of the box. Also, no iOS support etc.

The Wi-Fi RAM contains a lot of code it executes regularly. This is due to its patching mechanism. On startup, it loads a firmware image that either defines station (client) or access point behavior. Most of the code runs in RAM and is executed in RAM. However, without knowing too much about the currently running firmware, we still need to get somewhat controlled code execution to confirm that the WLAN RAM Sharing feature actually leads to code execution.
For this, create an InternalBlue script based on one of the examples for the chip you're looking at and do the following in a loop:
adr = random.randrange(0x680800, 0x6a1f00)
code = asm("b 0xcafebabe", vma=adr-0x500000)  # rebase to 0x180000
internalblue.writeMem(address=adr, data=code)
#time.sleep(3);
The sleep is optional, but without it you will gain code execution so fast that you won't even be able to see at which address that was. Sometimes you need to unlock the phone because Wi-Fi is in a sleep state otherwise. This is the same code execution we demoed in the talk :)

The RAM sharing is anchored so deep in the hardware that it still works more than a year after reporting it. There are some security notes by Cypress on this, but I haven't seen any by Broadcom. Since it is unpatchable, it also didn't appear in any iOS or Android release notes. So, just in case you haven't heard about it, this might be the reason ;)
Bluetooth Wi-Fi

Popular posts from this blog

Always-on Processor magic: How Find My works while iPhone is powered off

Update: We wrote a paper with even more technical details :) iOS 15.0 introduces a new feature: an iPhone can be located with Find My even while the iPhone is turned "off". How does it work? Is it a security concern? I saw this feature rather early on one of my iPhones with an iOS 15 beta. Here's a screenshot I took in July. The user interface changed a little bit since then. It took a bit longer until the public realized this feature exists. One needs to update to iOS 15.0, use an iPhone that has location services enabled, a logged in user account, participates in the Find My network, etc. And the weirdest thing nobody does these days: One has to turn the iPhone off. But once Twitter found out, this took off. And so did the rumors how this was implemented. Apple's Always-on Processor (AOP) There's only little public documentation about the AOP. All chips and various embedded devices Apple manufactures run a real-time operating system, called RTKitOS. The AOP on
Read more 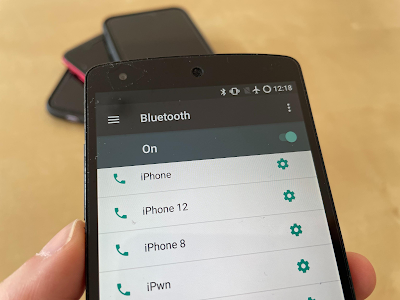 There's a new Bluetooth vulnerability collection, called BrakTooth . PoCs are under NDA until end of October. Are these bugs real? Do they affect more than the Cypress dev kit, for example, iPhones and MacBooks? Jan, who developed the Frankenstein emulator for Cypress chips and discovered the BlueFrag vulnerability within Android, joined my efforts in reproducing these bugs. All tooling we used is already public, as well as the BrakTooth vulnerability descriptions. We will not publish our own BrakTooth PoCs until the BrakTooth NDA ends to protect end users. Link Management Protocol If you're reading this and already have a background on Bluetooth, continue reading on the next section. Everyone else still needs to get familiar with an over 3k page long nightmare, called "Bluetooth Specification". All page numbers refer to version 5.2, even though version 5.3 was released recently. As of now, there's no 5.3 chip available. The Link Management Protocol (LMP) negoti
Read more